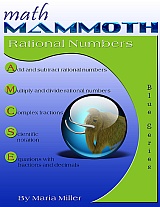 The first lesson, Fractions and Decimals, reviews methods of converting fractions to decimals and decimals to fractions.

The lesson Multiple Operations with Rational Numbers reviews the order of operations and applies it to fraction and decimal problems with more than one operation. It also presents a simple method to solve complex fractions, which are fractions that contain another fraction, either in the numerator, in the denominator, or in both.

After a lesson on scientific notation, the instructional portion of the book concludes with two lessons on solving simple equations that involve fractions and decimals.

I have made a set of videos to match the lessons of this book. You can access the videos here (free).