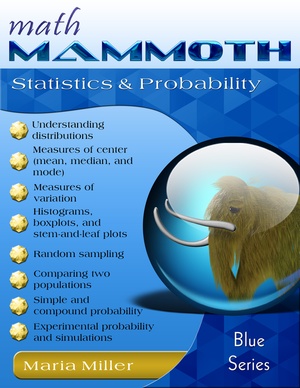 Math Mammoth Statistics & Probability is a worktext covering statistics and probability topics for 6th-7th grades. Being a worktext, the book contains BOTH the instructions and exercises.

The statistics lessons in the first section are for about 6th grade level, starting with the lesson Understanding Distributions. The concept of distribution is a fundamental theme in the study of statistics. A distribution is basically how the data is distributed. The distribution can be described by its center, spread, and overall shape. The shape is read from a graph, such as a dot plot or bar graph.

Two major concepts when summarizing and analyzing distributions are its center and its variability. We study the center in the next lessons about mean, median, and mode. Students not only learn to calculate these values, but also relate the choice of measures of center to the shape of the data distribution and the type of data.

Two major concepts when summarizing and analyzing distributions are its center and its variability. First we study the center, in the lessons about mean, median, and mode. Students not only learn to calculate these values, but also relate the choice of measures of center to the shape of the data distribution and the type of data. Next, we study measures of variation, starting with range and interquartile range. Students use these measures in the following lesson, as they both read and draw boxplots.

The lesson Mean Absolute Deviation introduces students to this measure of variation. It takes many calculations, and the lesson gives instructions on how to calculate it using a spreadsheet program (such as Excel or LibreOffice Calc).

Next, students learn to make histograms. They will also continue summarizing distributions by describing their shape, and giving a measure of center and a measure of variability. The lesson on stem-and-leaf plots is optional.

Another major topic is comparing two populations, either directly or by using samples from the populations. Students learn to use the overall distributions and the measures of center and variability to compare two sets of data in various ways. While some of the ways in which we compare the data are only informal, all of the concepts presented are fundamental to the use of statistics in various sciences. Students also do a project where they gather data on their own from two populations and compare them.

Probability is a new topic to the students, as it has not been studied in the other books of the Blue Series. However, most students have an intuitive understanding of probability based on hearing the terms “probably” and “likely,” listening to weather forecasts, and so on.

In the past, probability was only taught in high school — for example, I personally encountered it for the first time in 12th grade. However, during the 1990s and 2000s, it “crept” down the grade levels and many states required probability even in elementary school in those years. By 7th grade, students have studied fractions, ratios, and proportions, so they are ready to study probability, and also because students need an understanding of basic probability concepts in order to study statistical concepts in middle and high school.

We start with the concept of simple (classic) probability, which is defined as the ratio of the number of favorable outcomes to the number of all possible outcomes. Students calculate probabilities that involve common experiments, including flipping a coin, tossing a dice, picking marbles, and a spinner.

In the next lesson, Experimental Probability, students conduct experiments, record the outcomes, and calculate both the theoretical and experimental probabilities of events, comparing the two. They get to roll a die hundreds of times and draw a card from a deck. You can access spreadsheet files for some of the probability simulations at this link.

Next, we study compound events, which are events that involve two or more individual events. An example of this is tossing a die two times or choosing a girl, then a boy from a group of people. Students calculate the probabilities of compound events by using the complete sample space (a list of all possible outcomes). There are several ways to construct the sample space, such as by drawing a tree diagram, making a table, or sometimes simply by listing all the possible outcomes using logical thinking.

The last major topic in this book is simulations. Students design simulations to find probabilities of events. For example, we let the heads and tails of a coin represent a female or male, and toss a coin to simulate the event of choosing a person randomly. Later in the lesson, students design simulations that use random numbers. They generate those numbers either by using the free tool at Random.org/integers or a spreadsheet program on a computer.