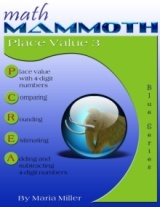 Math Mammoth Place Value 3 is a short worktext meant for third grade level. It focuses on place value with four-digit numbers, and adding and subtracting such numbers. We also study rounding and estimating, which are very important skills for everyday life.

After that we study regrouping in addition and subtraction, using four-digit numbers. The last major topics in this book are rounding numbers to the nearest hundred and estimating. Students also get to do some more word problems.