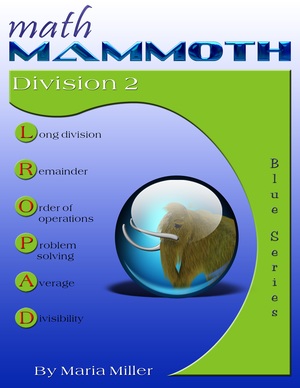 We start out by reviewing basic division facts by single-digit numbers (such as 24 ÷ 4 or 56 ÷ 7). After that, we study terminology of division and dividing numbers by whole tens and hundreds (such as 400 ÷ 20). Next students practice the order of operations—this time with division as one of the operations.

After long division, we study the concept of average, which is a nice application of division, and problems that involve finding a fractional part of a quantity using division. For example, we can find 3/4 of a number by first finding 1/4 (dividing by 4) and then multiplying the result by 3. Students get help from visual bar models to solve the problems.

The last section deals with elementary number theory. We study basic divisibility rules (though not all of them), prime numbers, and finding all factors of a given two-digit number.

Answers are appended to the end of the book.

The digital download version (PDF) of this book is enabled for annotation. This means that if you prefer, the student can fill it in on a computer (with Adobe Reader) or on a tablet (requires a PDF app with annotation tools).


How to teach long division

The video below shows the same basic steps as are used in the Math Mammoth Division 2 book to teach long division:

I downloaded Division 2 for my son who was struggling with remembering the process of division and making so many errors. He's nearly done with the workbook. I just wanted to say that I am very pleased with the results. He is quite fluent now and I'm checking out your other workbooks. I appreciate the use of grids to work out problems and the number of word problems. Thank you!