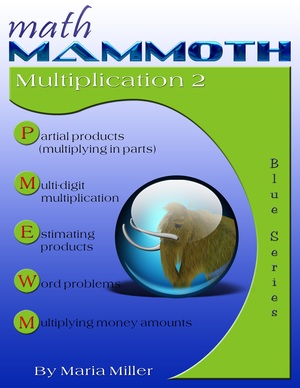 The first lessons briefly review the multiplication concept and the times tables. The next lesson, where students solve scales or pan balance problems, is intended to be somewhat fun and motivational. The balance problems are actually equations in disguise.

Before showing the traditional form of multiplication, the lesson Multiply in Columns—the Easy Way shows a simplified form of the same, which is essentially just multiplying in parts. You may skip that lesson at your discretion or skim through it quickly if your child is ready to understand the standard form of the algorithm, which is taught next.

Students also study estimation, the order of operations, and multiplying with money. Many kinds of word problems abound in all of the lessons. Students are supposed to practice writing a number sentence for the word problems—essentially writing down the calculating they are doing.

The lesson So Many of the Same Thing could be entitled "Proportional Reasoning" but I wanted to avoid scaring parents and children with such a high-sounding phrase. The idea in that lesson is really simple, but it does prepare for proportions as they are taught in 7th grade and in algebra.