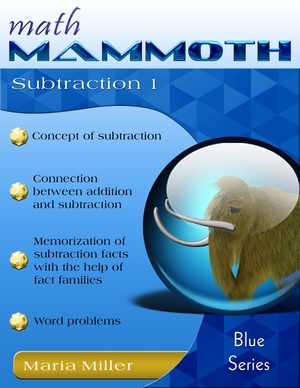 Math Mammoth Subtraction 1 is a worktext focusing on various concepts related to basic subtraction, and with basic addition and subtraction facts within 0-10. Most of the problems in the book only use numbers up to 10, but a few include numbers between 10 and 20.

Play with the blocks or other concrete objects until the child can use the words "minus" and "equals" in his/her own speech. This will make it much easier to introduce the actual written symbols.

The next step would be to abandon concrete objects and use semi-concrete illustrations or pictures. That is where this book starts with the lesson Subtraction Is "Taking Away". At this stage, the child can still figure out the subtraction problems by simply counting how many objects are left.

So, how does the student learn how to subtract without actually counting concrete objects or pictures? As a transitional strategy, we will study counting down: the student solves 9 − 3, for example, by counting down three steps from nine: eight, seven, six. So the answer is six.

However, the final goal is to learn to use the addition facts to find the answer to subtraction problems. For example, once the student knows that 5 + 5 = 10, then this fact is used to solve 10 − 5 = 5. For this purpose, the student must learn well the connection between addition and subtraction. This is why this book concentrates heavily on the connection between addition and subtraction with several lessons, ending up with the concept of fact families.

Besides "taking away", subtraction is also used for these two situations:

These two situations are dealt with in several lessons in the book and are found in various word problems throughout the book.

In the latter part of the book, we encounter several lessons named Addition and Subtraction Facts with... They aim at helping the child to memorize the basic addition and subtraction facts. We are approaching it from the concept of fact families.

These lessons have a lot of practice problems. Use your judgment as to whether your child will need to do all of the problems. If he/she masters the facts quickly, you can skip some of them. 4

Besides the written problems, I encourage you to use games that are explained below. Children like to play, and using the addition and subtraction facts in a game gives them fun and education in the same "package".

While this book is not tied to any grade level, it is most suitable for first grade.

Check out also these free subtraction games and activities at our site: You might also be interested in the following books and worksheet resources:

My 4 year old just finished Subtraction 1. We've done Addition 1 and Place Value 1 this fall as well. He loves it! I found myself frustrated with Saxon Math K and found Math Mammoth last summer. We're going to breeze through Light Blue 1 this spring and have fun committing his math facts to memory. Thank you for a simple straightforward math program!