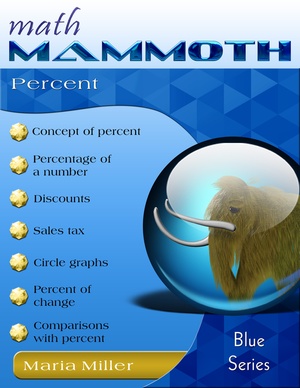 Math Mammoth Percent teaches students the concept of percent, how to calculate the percentage of a number, to figure discounts, sales tax, and interest, to draw circle graphs, to differentiate between a percent of change and a percent of comparison, and to know how to calculate both. The text is suitable for grades 6 through 8 (middle school).

I have made several videos to match the lessons from this book. You can watch them here.

The first lesson, Percent, practices the concept of percent as a hundredth part, and how to write fractions and decimals as percentages. Next, we study how to find a percentage when the part and the whole are given (for example, if 15 out of 25 club members are girls, what percentage of them are girls?).

I prefer teaching students to calculate percentages of quantities using decimals, instead of using percent proportion or some other method (such as changing 17% into the fraction 17/100 for calculations). That is because using decimals is simpler: we simply change the percentage into a decimal, and multiply, instead of having to build a proportion or use fractions. Also, decimals will be so much easier to use later on, when solving word problems that require the usage of equations.

Next is a lesson about discounts, which is an important application in everyday life. Then, we go on to the lesson Practice with Percent, which contrasts the two types of problems students have already studied: questions that ask for a certain percentage of a number (the percentage is given), and questions that ask for the percentage. For example, the first type of question could be "What is 70% of $380?", and the second type could be "What percentage is $70 of $380?"

Finding the Total When the Percent Is Known lets students find the total when the percentage and the partial amount are known. For example: "Three-hundred twenty students, which is 40% of all students, take PE. How many students are there in total?" We solve these with the help of bar models.

After a review lesson in the middle of the book, we study some of the basics again in the lessons Percentage and Solving Basic Percentage Problems. While the concepts are the same as in the lessons in the beginning of this book, this time we include more decimal digits and the coverage is faster, as these two lessons were originally written for 7th grade.

Percent Equations is meant for pre-algebra students and covers how to solve basic percent problems using an equation. It also explains the usage of a percent proportion.

Tying in with percentage of change, there is one lesson on Comparing Values Using Percentages. Students learn to solve comparisons involving percent (such as how many percent more (or less) one thing is than another) through applying concepts that they learned in finding the percentage of change and to differentiate clearly among the various types of comparison questions that can be asked.

Simple Interest is a lesson on the important topic of interest, using as a context both loans and savings accounts. Students learn to use the formula I = prt in a great variety of problems and situations.

The text concludes with a thorough review lesson of all of the concepts taught in the other lessons.


I have made several videos to match the lessons from this book. You can watch them here.

I have never really been in a position to write one of those glowing testimonials that every product puts on their website, but I just had to tell you that I truly AM thrilled with Math Mammoth. Amanda just finished the Percent book in record time and actually seemed to enjoy it. In the course of two books, she has gone from super-frustrated, tightened-down, hating math of all kinds to deciding that it's not bad after all and just breezing through it. Practically miraculous, if you ask me. She thinks ratios are fun (Is this really my child??) so we are doing Ratios and Proportions next, and life is just a whole lot easier at this homeschool than it used to be.

Many thanks for a wonderful product that I can actually afford.

Blessings to you, Maria~