Thanksgiving SALE! Get Math Mammoth and Make It Real Learning downloads & CDs at 28% off — right here at the MathMammoth.com website. Use coupon code THANKS28 at checkout. Offer valid through December 1, 2022. 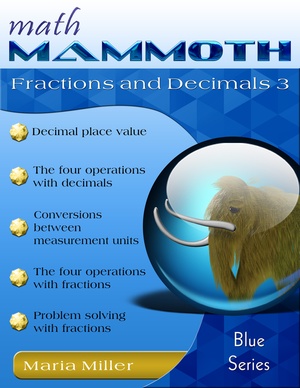 The goal of the book is to go through all of the fraction and decimal arithmetic using up to six decimal digits and larger denominators in fractions than in 4th and 5th grade materials. For some students, this may mean a lot of review, so if the student already has a good grasp of these topics, consider assigning only one-fourth to one-half of the exercises initially. Monitor the student’s progress and assign more if needed. The skipped problems can be used for review later.

Since the chapter focuses on restudying the mechanics of decimal arithmetic, it is a good time to stress to your student(s) the need for accurate calculations and for checking one’s final answer. Notice how the lessons often ask students to estimate the answer before calculating the exact answer. Estimation can be used as a type of check for the final answer: if the final answer is far from the estimation, there is probably an error in the calculation. It can also be used to check if an answer calculated with a calculator is likely correct.

In the lessons about multiplication and division of decimals, students work both with mental math and with standard algorithms. The lessons that focus on mental math point out various patterns and shortcuts for students, helping them to see the structure and logic in math. I have also explained why the common rules (or shortcuts) for decimal multiplication and decimal division actually work, essentially providing a mathematical proof on a level that sixth graders can hopefully understand.

The last lessons deal with measuring units and the metric system, rounding out our study of decimals.

The introductory lesson on the division of fractions presents the concept of reciprocal numbers and ties the reciprocity relationship to the idea that division is the appropriate operation to solve questions of the form, “How many times does this number fit into that number?” For example, we can write a division from the question, “How many times does 1/3 fit into 1?” The answer is, obviously, 3 times. So we can write the division 1 ÷ (1/3) = 3 and the multiplication 3 · (1/3) = 1. These two numbers, 3/1 and 1/3, are reciprocal numbers because their product is 1.

Students learn to solve questions like that through using visual models and writing division sentences that match them. Thinking of fitting the divisor into the dividend (measurement division) also gives us a tool to check whether the answer to a division problem is reasonable.

Naturally, the lessons also present the shortcut for fraction division—that each division can be changed into a multiplication by taking the reciprocal of the divisor, which is often called the “invert (flip)-and-multiply” rule. However, that “rule” is just a shortcut. It is necessary to memorize it, but memorizing a shortcut doesn’t help students make sense conceptually out of the division of fractions—they also need to study the concept of division and use visual models to better understand the process involved.

In two lessons that follow, students apply what they have learned to solve problems involving fractions or fractional parts. A lot of the problems in these lessons are review in the sense that they involve previously learned concepts and are similar to problems students have solved earlier, but many involve the division of fractions, thus incorporating the new concept presented in this book.