^
You are here: Home → Blue Series → The Four Operations

Math Mammoth The Four Operations (with a Touch of Algebra) 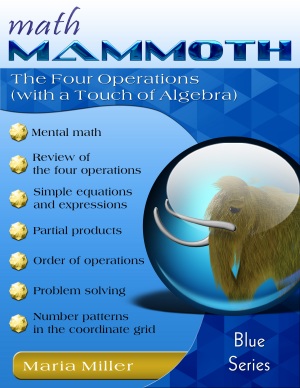 Math Mammoth The Four Operations (with a Touch of Algebra) is a mathematics worktext meant primarily for fifth and sixth grades. A worktext means that the book is a textbook and workbook together: the lessons include both the explanations of the concepts, as well as practice exercises.

The main topics of this book are mental math tricks, simple equations and expressions, the order of operations, partial products, using all four operations in solving problems, and number patterns in the coordinate grid.

Students encounter the exact definition of an equation and an expression. They practice the order of operations with problems that also reinforce the idea of the equal sign (“=”) as denoting equality of the right and left sides of an equation. These kinds of exercises are needed because students may think that an equal sign signifies the act of finding the answer to a problem (such as 134 + 23 = ?), which is not so.

Students solve addition and subtraction equations both with the help of bar models and also without. These models are also used for simple multiplication and division equations and for mixture equations, such as 4x + 38 = 128.

Although the book is named, “The Four Operations,” please notice that the idea is not to practice each of the four operations separately, but rather to see how they are used together in solving problems and in simple equations. We are trying to develop student's algebraic thinking, including the abilities to: translate problems into mathematical operations, comprehend the many operations needed to yield an answer to a problem, “undo” operations, and so on. Many of the ideas in this chapter are preparing them in advance for algebra.

The answers are appended.