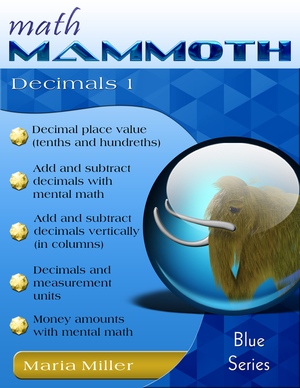 Math Mammoth Decimals 1 is is a worktext about decimal numbers for approximately 3rd and 4th grade levels. Being a worktext, it includes both the instruction and the exercises, all written directly to the student.

This book deals with decimal numbers that have tenths and hundredths—numbers with a maximum of two decimal digits. We only deal with some of the basic operations: addition, subtraction, and multiplication by a whole number, with a strong emphasis on mental calculations. The idea is to lay a solid conceptual foundation so that the student does not succumb to rote memorization of rules and procedures without understanding.

Note: multiplication and division of decimals are not covered. Those are taught in Math Mammoth Decimals 2.

We start out with place value—first only with tenths, or numbers with one decimal digit, and in a later lesson with hundredths. The lessons use number lines, fraction models, and place value charts to teach decimal place value and comparing decimals.

Next, students add and subtract decimals, both in columns and using mental math. We compare decimal operations with corresponding fraction operations in order to show why they work.

A common student error is to add 0.4 + 0.8 = 0.12. Here, the student may be considering the decimal part of a number as a “separate whole number”, and try to apply whole number arithmetic within the decimal part. To help such a student, read the decimals as fractions and emphasize how fractions are added. Think: four tenths plus eight tenths equals twelve tenths, which is 1.2.

As a real-life application, the book includes a lesson on using decimals with metric measurement units.

You might also be interested in:
From a homeschooling parent who has used Decimals 1 with a 5th grader:

My 5th grader and I worked through the decimals book. It actually helped me to understand decimals a lot better also. We were both amazed at how easy they are to work with once you understand the concepts behind them.

I love the books. They include a lot of thinking and reasoning skills that our other math program did not include. They also present things in a simple clear manner. No more tears when it comes to decimals!!!