May SALE! Get Math Mammoth and Make It Real Learning downloads & CDs at 25% off — right here at the MathMammoth.com website. Use coupon code WD2Q-P5CB-TXH4 at checkout. Offer valid through June 1, 2022. 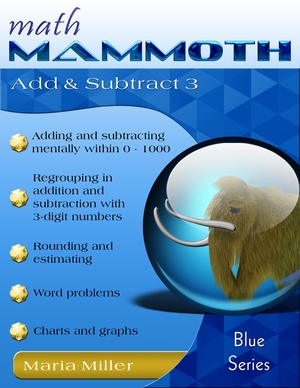 The first section of the book explores some mental math with three-digit numbers, and is suitable for second grade. We study adding and subtracting whole hundreds, whole tens, and ones within 0-1000, often comparing to similar problems within 0-100. In most of these lessons, the addition or subtraction is first illustrated with a visual model. You can use manipulatives instead, if you prefer.

The processes of regrouping in addition and subtraction are first practiced using visual models, to ensure the student understands the concept (the "why"), and does not only learn the procedure (the "how").

In the last section, the book includes addition and subtraction topics for third grade, starting with mental addition and subtraction. Through it all, students solve lots of word problems and practice some algebra in disguise, where they use a symbol or a ? for the unknown thing in the problem. We also study ordinal numbers, rounding and estimating, and order of operations.

Then we study the connection between addition and subtraction with bigger numbers, which also aims to help children think algebraically. Lastly, students get to practice their adding and subtracting skills in a practical way through reading a mileage chart and other types of graphs.