In this newsletter, my MAIN item is the post about infinity. I hope you find it enlightening!

Then there are lots of worksheets. This is because I have had to concentrate a lot lately on new worksheet generators, in preparing for the release of the revised version of Math Mammoth Grade 6-A.

I know the following piece is a bit long, but I REALLY hope you will take the time to read and try to understand the thoughts (if you don't know them already). This is one of the areas where YOU can show your students something about mathematics that is FASCINATING, AMAZING, awesome, mind-boggling!!! ... show them that mathematics is NOT just mundane, mind-numbing manipulation of numbers in calculations. This topic is not extra-curricular; it IS taught in pre-algebra / algebra 1 (real numbers), BUT you can explain some parts of it even to 4-6th graders.
This sounds really strange. How could there be different kinds or sizes of infinities?

I first encountered this idea in my university studies, and I thought it was absolutely FASCINATING!

The video below goes through the basics and explains them well, though really fast. I recommend you pause the video at those points where it goes too fast for you, and "rewind" or rewatch those parts. I will explain some of the points FROM the video below. Did you know... that in ONE sense, there are AS many even numbers AS there are whole numbers.

I know... in one sense, there aren't... but in another, there are. That is because to COMPARE the sizes of two sets (even infinite sets), we check if there is a one-to-one match between the numbers in the sets. And it turns out that, YES...


...it IS possible to make a one-to-one match between the set of even numbers and the set of all counting numbers:

This one-to-one correspondence (bijection) SHOWS or proves that the set of counting numbers and the set of positive even numbers are the "same-size". Both are infinite sets... but the "size of their infinity", so to speak, is the same.

Listing ALL the fractions?

Next, consider the set of all the fractions.
Could you easily come up with a way to LIST all the possible fractions?

Think about that... if you can make such a list, then you can put counting numbers and fractions into ONE-TO-ONE correspondence! (Because just by the fact it is a list, the items in that list are in order... and you can start COUNTING them with the counting numbers.)

The image below shows how to make the list. We put all fractions into a two-dimensional GRID, and then start going diagonally through the grid, starting with 1/1, which is 1. (Follow the arrows.) You will encounter equivalent fractions, which will be skipped over.

Again, think about this: ALL possible fractions are in the list. For example 145/8793 will be in the grid at the intersection of the 145th row and 8793rd column, and will eventually get listed in your list.

Fractions (rationals) are a COUNTABLE set

Now... this is where it gets interesting! Did you know there exists a BIGGER infinity than the infinity of the set of counting numbers? It is kind of astounding to think about.

The PROOF is on the video, starting at 2:58. Again, it goes fast, BUT I feel it is well explained, so just pause the video and run the explanation several times till you get it.

We call the set of all real numbers UNCOUNTABLE, because you cannot "count" or "list" all of them. And... the uncountableness comes from the non-rational (irrational) numbers. There are SO many of them!

I had not heard of the analogy of the night sky before (as in the video)... that rational numbers (fractions) are like the visible stars, and the irrational numbers are the rest, the blackness. That is kind of the way I've thought about it, though... that rationals are like individual dots on the number line, and irrationals are the "fill ins" that totally cover the number line.

So, there exist INFINITIES of different sizes. Some infinities are "bigger" than others!!!!! Mind-boggling, isn't it? (But I feel that it's GOOD that our human minds get boggled sometimes : )

Even the concept of infinity in itself is hard to grasp. For example, my daughter has a difficult time whenever she thinks about eternal time or space... something unending. I had always thought that seeing how the number line is unending would be HELPFUL in that respect — but it seemingly hasn't helped her (yet anyway).

(Near the end, the video shows a little "crack" in the word "MATH". Well... I am not sure. I think that it's NOT mathematics itself that would have a deficit or a crack, but that there is some kind of a limitation somewhere... maybe in our HUMAN thinking.) 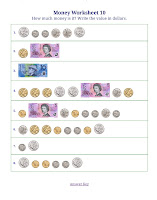 I have had these money worksheet generators for a while on my site, but recently I went through them and fixed some errors they had (SORRY!). For example, one problem I fixed could have caused the worksheet to take a long time to generate. They should work better now.

Please let me know if you have ideas for improvements - if they are easy to implement, I will do so.

You can make worksheets for counting coins and bills in 6 different currencies. You could even let your kids/students explore other currencies just for fun! Some of these countries, such as Australia, have really colorful and pretty coins/bills. 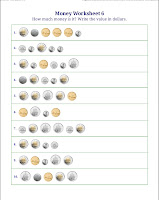 
4. Worksheets for order of operations (grades 2-9)

Yet more worksheets... for  order of operations. This one was difficult to make, and I cannot claim it is perfect in the sense that I wish I could have spent more time on it and made it more elaborate, have more variety, more operations, more options... but there are time limits so I had to stop at some point.

There are actually two generators:
You will find quick-to-make example worksheets on the actual web page, so go ahead, click on the links and check them out! 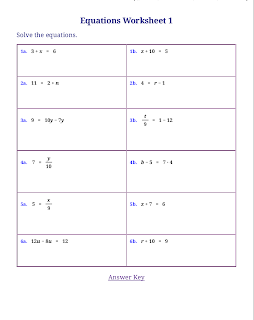 Another new worksheet generator — you can make customizable worksheets for linear equations (first-degree equations) for pre-algebra and algebra 1 courses (grades 6-9).

You can choose from SEVEN basic types of equations, including one-step equations, variable on both sides, or having to use the distributive property.

Please use the quick links below to generate some common types of equation worksheets.

Two-step equations
Variable on both sides and includes parenthesis

Challenges; includes rational expressions, such as (x - 5)/6, within the equations

I don't claim it is perfect... though I hope I got it working right. Let me know if you see something you'd like changed, and I can try work it in if it is not too big of a change.


Feel free to forward this issue to a friend/colleague! Subscribe here.